Third largest cause of blindness worldwide

AMD is characterized by the deterioration of the macula, the central area in the retina of the eye that controls visual acuity. There are two main types of AMD: wet (exudative) and dry (non-exudative). Wet AMD is caused by the growth of new, abnormal blood vessels that release an excessive amount of fluid into the macula, often resulting in severe permanent vision impairment. Dry AMD, a milder form of AMD, is the deterioration of tissue within the macula, often resulting from aging. It is estimated that nearly 5.44 million Americans will be affected by dry or wet AMD by 2050(1). 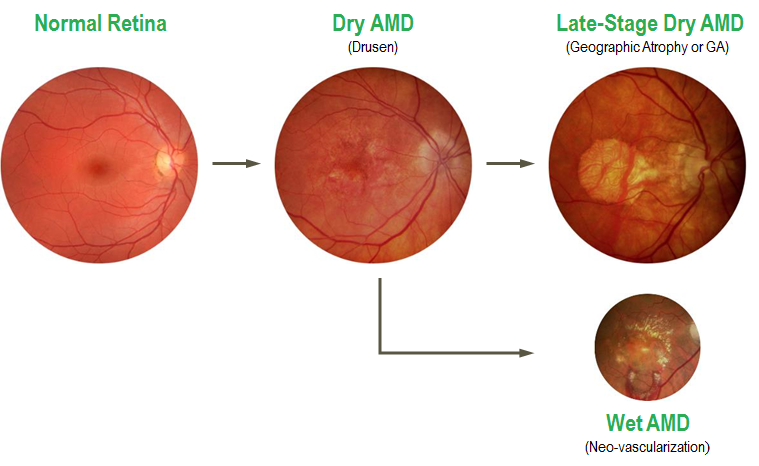 Early signs of vision loss identified with AMD include distorted or blurred vision, inability to see in dim light, or "blind spots" in central vision. Some patients diagnosed with AMD may not immediately experience symptoms, however, the gradual vision loss associated with this degenerative disease makes simple daily activities, such as recognizing faces, driving a car or reading, extremely difficult.

The pathogenesis of AMD is complex. In addition to pathogenic roles for aging, genetics, oxidative stress, and inflammation, excess accumulation of toxic, vitamin A-derived byproducts of the visual cycle (such as A2E) and decreased oxygen in the retina are thought to be involved in the development and progression of AMD. These factors lead to increased dysfunction and metabolic stress of the retinal pigment epithelial (RPE) cells, which result in further disease progression.